It’s Friday and I’ve decided that it’s summer! It’s the only way I can justify wearing shorts I feel approximately 10 years to old to wear. My beloved Kenya shoes helps. It also helps that the silk top is Alexander Wang (pause for reaction). I never wear it due to my previously mentioned spill record, and I only bought it, because the label looked nice and it was on sale from 2200 dkr to a bargain of 700 dkr (for a top I never wear? This is probably where the real reaction should be!)
Sometimes I buy ridiculously expensive clothes so the shop personal thinks I am cool.
27. april 2012
No Comments

I just got home from Student Music Award 2012 where I walked around in very feminine shoes and constant fear of nipple slip. But most of all I rooted for my boyfriend’s rock trio The Boy That Got Away and of course they won the entire competition – Yay!

The fine white blouse I am wearing was sewn by my great grandmother, Ellen, over a hundred years ago. Today Ellen is a phenomenon in my family. Because she was such a decent woman we call it “making an Ellen” every time one of us girls in the family are being too holy (fx by choosing an apple over candy). Therefore wearing her fine blouse for the first time is both cozy and nerve wrecking since I have quite a high spill record when it comes to white clothes.
The Topshop pants still doesn’t make my legs look like Gisele’s for which I am sincerely disappointed.
25. april 2012
2 Comments

Please don’t ask why I never wear this amazing tailor made black silk dress I bought in Shanghai!?

I am cheating with the jacket, though because I’ve actually been freezing in the jackets I haven’t worn within the past year. So I am borrowing my boyfriends jacket when the weather is too cold – Uh, I am bad:)

I am “saving up” shoes and dresses for the Fashion Summit next week, and to compensate I am wearing my old beloved Stetson hat (well aware that with a head the same size as an average boxer it’s not always pretty). I actually measured my head today. The circumference is 60 cm. More than half a meter! That can’t be normal for a girl?! I am still deciding whether I am impressed or depressed.
PS. But the shoes I am wearing is a complete knockout! They are a gift that I only kept out of pity but after actually trying them on I found out I think I love them. They are so sweet, ugly and helpless.
23. april 2012
No Comments

Nervous and happy at my talented tailor friend‘s apartment the day before the exam.
I just got back to Aarhus after a hectic and very lovely weekend in Copenhagen, and I am happy to read in my two readers your comments that I am not the only one who is, more or less subconsciously, moving toward a color less wardrobe.
Right now I am reading a Vogue article about the english queen who apparently doesn’t care what people think about her color fetish (remember: Everytime you see a rainbow God is having gay sex:))

These are my FINAL of the 14 pairs of pants I haven’t worn in the past year. This means that I am now allowed to choose freely between the pants I haven’t worn (Uhm, I like these legal obsessions).
I am realizing that almost all my unworn clothes bought from the time I was younger, are very colorful, which is in strong contrast to my self image of one of the low key fashion adults like Signe Bindslev Henriksen who’s wardrobe looks somewhat like this:

(The pictures are from p. 112 in the april issue of Eurowoman)

I can’t help finding it a bit comical that I desperately wish for three identical Rick Owens jackets and think its really tasteful to have five (also almost) identical cardigans, when all my senses tells me that it is seriously boring.
Today I read about why it is that every colour (or thing) can only at best aspire to “become the new black”. Where does this chromophobia come from? Isn’t it a bit weird? I mean, a couple of days ago I was in my red dress and I tell you it is impossible to feel bad when wearing that dress! By default I buy and wear colour, but my rational adult self thinks I look much more attractive in the classic (boring?) stuff. Maybe one should just let the french handle the laws of simplicity and settle with weirdo colors and patterns.
Hmmm… I will feed my mind with colours and bastogne and get back as soon as I have the answer. 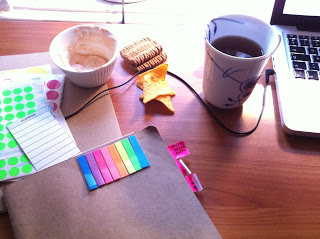 Oh, may I ask you something on the faldereb?
Out of all your clothes, what makes you the most happy to wear – Why?
19. april 2012
5 Comments

As you can see we are now entering the dress era. It is nice to wear them again (but always remember deodorant when wearing synthetic clothes. No matter what time you went to bed). 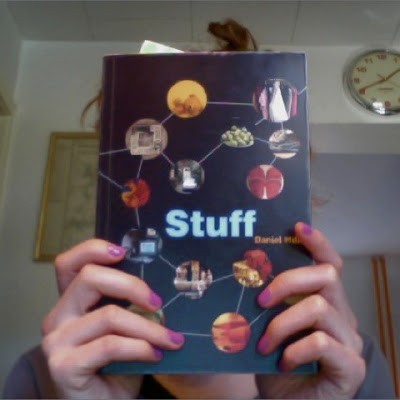 I have a confession: I’ve always thought that fashion is superficial and shallow, which is why I am more annoyed than embarrassed by the fact that I, instead of living out my own taste, feed on what the fashion system dictates me to wear.

The past days I am seriously beginning to doubt my beliefs though.

I have read fashion blogs for about two years, and I have always been a bit embarrassed about it. Blogs like Trines Wardrobe where a girl is photographing her self every single day, I mean come on! Of course I know that the only reason I am repelled by the whole self-absorbed thing is because I do the exact same: I am on Myspace, Twitter, Facebook, Pinterest, Blogspot AND a I have a website (two if we include Danish Models). And I’ve googled my own name several times. Self-absorbed = me!

Anyhow, the reason for my epiphany today is a combination of a book and two american teenagers. The book I am reading right now is this one by Daniel Miller:

And what he is saying is that in the modern western society we experience truth and being as something on the surface, because people are always defined by their current abilities and achievements. Whereas other more institutionalized societies (for example like back in the day) see truth and being as something deep within the self and relatively constant.
The fact that we everyday experience this ‘being’ as something on the outside obviously affects our relationship with our clothes, since clothes automatically will represent a way to discover who we actually are. Of course we spend more time being concerned with how we look, because how we look equals, not only a reflection of, but who we actually are. We build up our identity through what we wear.
But at the same time we have this notion that ‘being’ is supposed to be something deep, and this has some funny consequences for example in terms of our perception of being natural:
“We have this very peculiar ideal about looking natural, which tends to imply that putting on make-up and clothes is false and superficial. But why should we assume this? […] Why on earth should the natural look of a person be a guide to who that one person is? By contrast, a person who spends time, money, taste and attention in creating a look, where the final look is the direct result of all that activity and effort, can properly be discovered in their appearance. Because now one is judging what we have done, not what they happen to look like originally.”
I think that is pretty exiting, but also kind of one sided. Therefore I was happy when I found a blogpost from an american teenager talking to other teens about having the guts to create your (true and profound) identity on the outside, which of course is scary, because it’s new and you don’t know if it’s you or not yet, because you are body storming to find out, instead of rationalizing or copying.
How to Not Care What Other People Think of You
(I wish I read this 15 years ago)
“I think most people are afraid of dressing a little stranger or cuter because they’re afraid people will think they think they’re so great. Like people will be like, “OH, SO YOU’RE ALL ARTSY NOW?” Nobody will say this if you act like it’s no big deal, as opposed to constantly checking yourself in trophy-case reflections or whatever. If anyone does say it, you look at them, give one of the more subtle “you are an idiot” bitchfaces, and say, “…No?” And they will feel like a dumbass.[…] What such people don’t get is that most people who like more obscure music or wear vintage clothes don’t think of themselves as artsy, they’re just exploring and trying to define their taste instead of being someone who likes whatever is handed to them for fear of being mistaken for pretentious. I don’t like the term hipster—I think it’s become so broad as to apply to basically everyone—but the defining quality is that a hipster thinks and cares about what their tastes say about them, instead of just liking what they like. And so there is nothing more hipster than a person who decides that the only reason another person is wearing a colorful dress is that they’re concerned with what that dress means for their image. It’s hipster to give a shit if other people are hipsters or not; this is why people who claim they’re not hipsters are the most hipster of all, because they’rethinking that hard about it, and caring that much about what other people think.
People are afraid of trying to be creative because they’re afraid that they won’t succeed, but who said your “success” in getting dressed has to be evaluated by other people? As long as you’re into what you’re wearing and it makes you more comfortable with yourself, it doesn’t matter if someone else thinks you’ve put together a perfectly composed outfit. Actually, the effect of your confidence will only add to how stylish your outfit seems. It’s like the best catch-22 ever.
***
On top of that I then discovered that this little brat whom I always liked to hate actually had some really interesting ideas about fashion, feminism and society at TedxTeen.
So today I am wearing my dad’s old pants, my reverse jacket and two old plastic horses with pride (and a slight hope that I am now a tiny step closer toward creating a sustainable fashion consumption project that will actually appeal to people). 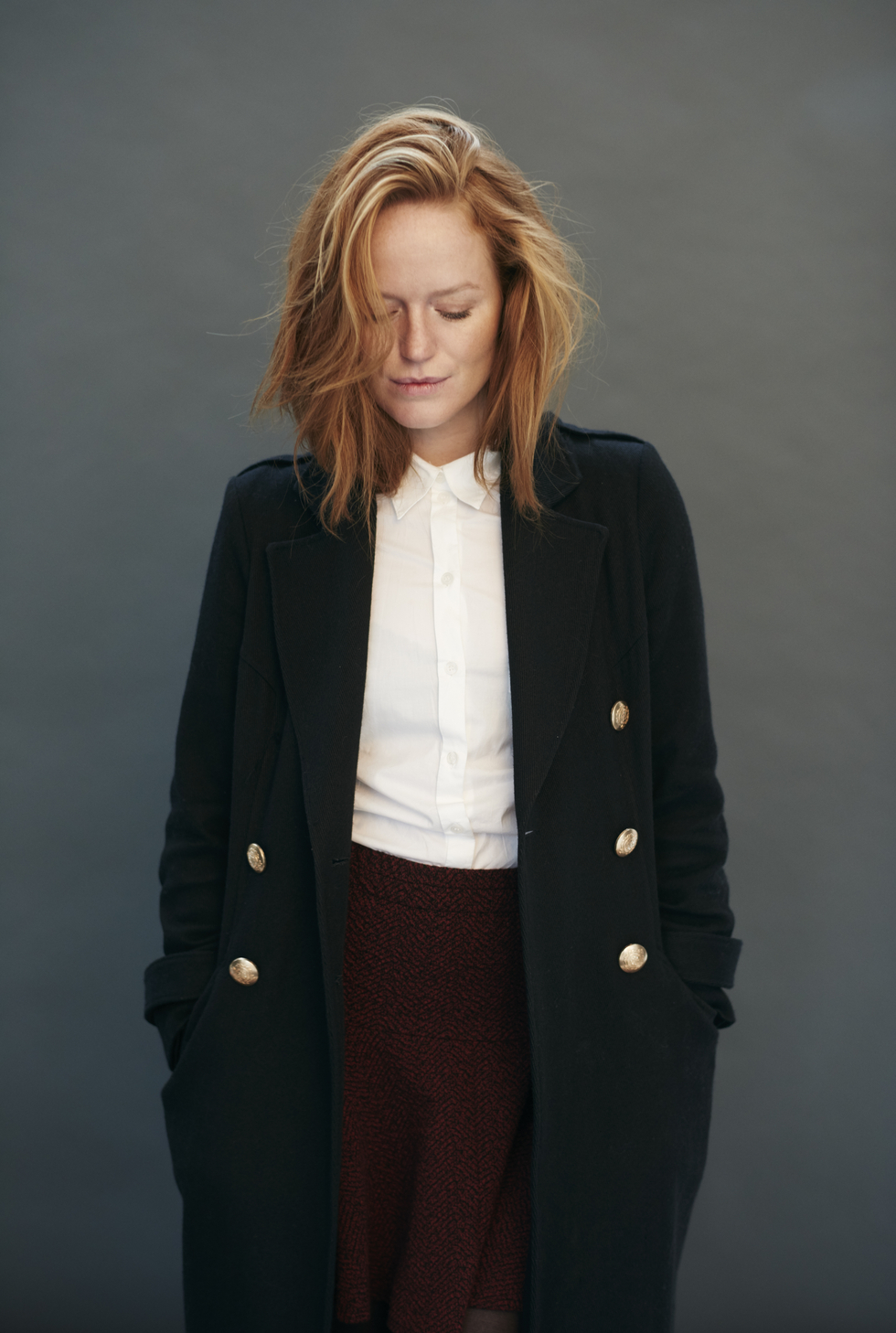